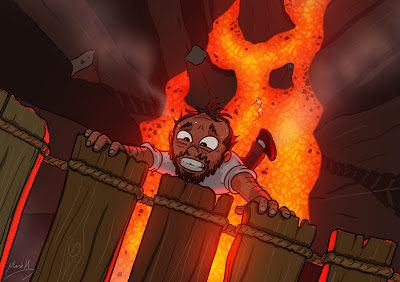 This was originally just a rope bridge over a canyon, because a rope bridge never fails to put me on the edge of my seat. But it just wasn't interesting enough to look at, and guy-I-don't-have-a-name-for-yet just wasn't standing out from the ground. Rocks, plants or water could have helped, but they're too calm and pleasant - as if hanging off a bridge didn't already make the scene dangerous enough. Lava also adds an additional element of "where is he, and what is he doing there?"

Also, I've decided to switch to four fingers for these guys. The more realistic I draw hands, the weirder it looks to have just 3 fingers.
Posted by Mark on Sunday, December 11, 2011