The Positronic Brain is one of my favourite pieces of work, however one bit has always been bugging me. The brain. When it came time to create the chrome casing of the brain it became apparent I'd need to actually create some kind of environment. I  came up with a slightly-futuristic room for the sake of creating realistic reflections, at the time not realising how prominent it would be in the final piece. At first it seemed to work, but when I really started to look at it afterwards I grew to dislike it. It really spoiled the scene for me. It detracted from the mood. The environment wasn't right. It was like seeing the sound stage and craft services table reflected in C-3P0. So tonight I finally got around to reworking it and spent a few hours crafting a more apt environment. 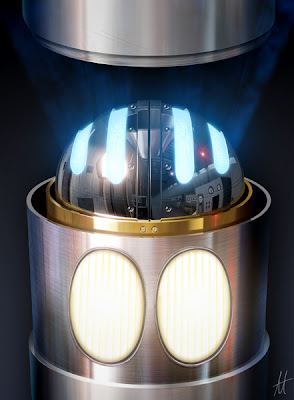 A picture tells and a story, and God is in the details.

To see the original version of this picture and where it came from, and read about what this picture means to me, check out this post.

I'll soon get round to posting some of the work I've been doing lately, but in the meantime here's something I drew on my phone's touch screen that I'd like to tackle in Photoshop one day. Not very original, but it'd be fun practice.

Incidentally, if you play Draw Something, add me, Mark_H_ - I got back into this game last night. 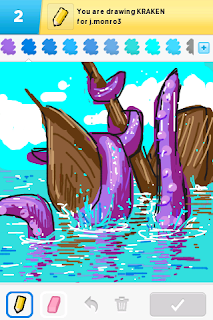 One of the thing that inspires me in this game is the limitations. I can't get accurate brush strokes, I'm limited by brush thickness and I've not that big a colour palette. I find I thrive with such restrictions; where it's a sort of do-what-you-can-with-what-you've-got situation. It frees you up. I used to love Biro pens, MS Paint and Adobe Flash for that sort of thing, where as if I'm using Photoshop there's just too much choice so I end up over-working things - which is definitely something I've encountered with the recent illustration work I've been doing. I wonder if I just need more practice at it because I'm straying outside my comfort zone, or if introducing some kind of restrictions before starting would be a better idea, such as a stricter time limit, or picking a colour palette before painting.

It's maybe not a good example, but compare the first Star Wars film, which was fraught with production problems, experimental effects and a tight budget, to the prequels where George Lucas could basically do anything he wanted. Finding creative solutions of obstacles often seems to produce better results than just having the power  to do everything exactly as you see it in your head.

As for my own work, I next want to experiment with bold, simple colour. I shy away from it too often when given the choice, but I really do like some of the stuff I do in Draw Something that reminds me of the limited palettes and primary colours of old video games, which I mentioned in this post.

Any other artists/illustrators have any thoughts on this subject?
Posted by Mark on Friday, April 19, 2013 2 comments: